I am just back from a stimulating conference in Vienna, sponsored by the “Visions of Community” project at the Institut für Mittelalterforschung (Institute for Medieval Studies), Östereichische Akademie der Wissenschaften (Austrian Academy of Sciences), in cooperation with the University of Poitiers.

The title of the conference was “Categorising the Church: Debates about Religious Communities in the Carolingian World.” Our particular concern was the background and subsequent reception of the monastic and canonical legislation passed by the Council of Aachen in 816 and 817 under Emperor Louis the Pious. This council made, for the first time, a firm distinction between communities judged strictly “monastic” and those termed “canonical.” I was asked to contribute something liturgical, and I gave a paper entitled “The 816 Liturgical Reforms, Hildemar’s Commentary on the Rule, and the Milanese Rite.”

The only major liturgical element of the 816 legislation was a requirement that monks chant the daily offices according to what is prescribed in the Rule of St. Benedict. (“Canons” were to continue using the “Roman” form of the Office, as the Frankish Church had received it.) One of our best sources of information about how this legislation was received is Hildemar of Corbie’s commentary on the Rule of St. Benedict, based on lectures he delivered at the northern Italian monastery of San Calocero in Civate in the 840s. One of the versions of his commentary (which has a very complicated textual history) is now available in a collaborative online edition and translation, with an excellent bibliography and links to manuscript sources: www.hildemar.org.

Hildemar is an important witness to the determination of “reformed” Benedictine monks to chant the Office according to the Rule. He also takes exception to the practice, of which he gives the earliest evidence, of monks’ abandoning the Rule’s pattern of the Office and chanting the Roman form during the sacred Triduum before Easter (Maundy Thursday, Good Friday, Holy Saturday), for the sake of unity with the whole Church. Hildemar alleges that the shortened forms of the Office used on such days are appropriate only for “canons,” who have to deal with “the crowd of the people, including women and children.”

I further argued, however, that Hildemar’s commentary must be understood against the background of his rather surprising liturgical context. Civate is in the diocese of Milan, which alone among the local uses of the Frankish Empire retained its distinctive liturgy in the face of a Carolingian programme of liturgical standardization. Hildemar quite clearly reveals that his community used a Milanese (“Ambrosian”) sacramentary, and I wonder whether we can find further evidence of how this local tradition was adapted for use in a Benedictine monastery. I have until the end of the year to finish combing through the commentary for evidence. What I find fascinating is that Hildemar, who seems so strict and pedantic in his teaching, emerges as an unexpected patron of liturgical pluriformity: as long as what is done is agreeable to the Rule, he doesn’t mind variety from place to place.

The participants in the conference kindly indulged me while I sang analogous examples from the Gregorian and Ambrosian chant repertory to demonstrate the “aural” difference between the two. In my defence, I was the last paper of the whole event, so I had to wake them up somehow! 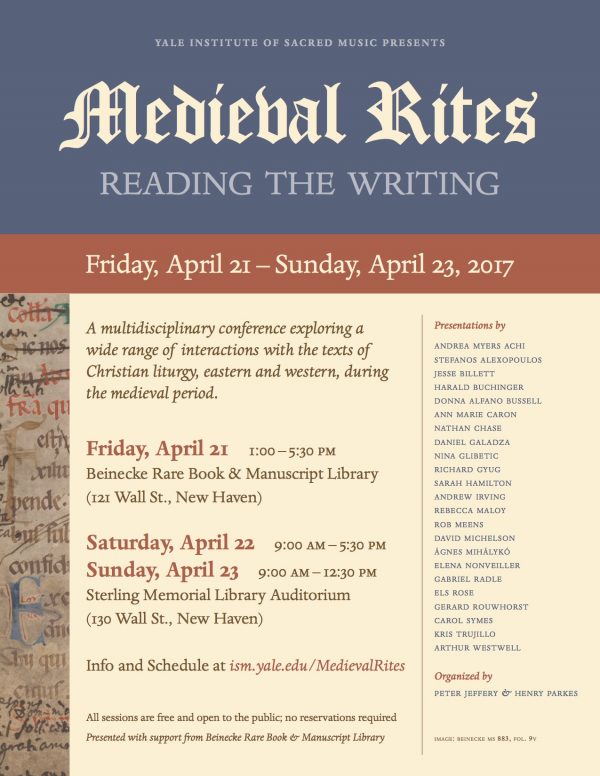 It was recently my pleasure to give a paper at Yale University’s Institute for Sacred Music, as part of a conference entitled “Medieval Rites: Reading the Writing,” organized by the distinguished medieval musicologist Peter Jeffery and my fellow Rankin alumnus Henry Parkes (about whom I have raved elsewhere). The conference was unusual in bringing together experts on both Western and Eastern liturgy.

My paper was called “Chant on the Edge: Antiphoner Texts Among the Marginalia of Cambridge, Corpus Christi College, MS 41.” I presented some preliminary results of my research on this manuscript, which I am currently editing for the Henry Bradshaw Society.

While at Yale, I was also a guest of the “Song Lab” of the Music Department, which meets to sing music from facsimiles of early notations and to discuss papers submitted in advance. I had the benefit of their comments on a draft of an article I’m working on: “The Muchelney Breviary Fragment: London, British Library, Additional 56488, fols. i, 1–5.” But the best part was singing through Absalon fili mi from the original notation. Alas, we transposed it up a fourth to accommodate the sopranos, so I wasn’t able to try for the low B-flat at the end!